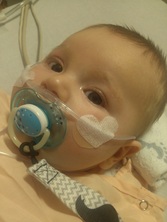 When Max was 2.5 months old, his doctors told us (after doing genetic testing) that he had spinal muscular atrophy (SMA), type 1. SMA is a life-threatening genetic disease affecting motor neurons. Individuals with SMA may be unable to walk, sit up unassisted, and (in the most severe forms) eat and breathe. SMA type 1 is the number one genetic killer of infants. There is currently no known treatment or cure.

However, there is hope. Researchers have identified the gene that causes SMA. There are multiple treatments approved by the FDA, with more in various stages of clinical testing (including human trials) and new avenues being reported each year. All the while, individuals and families affected by SMA continue to raise awareness, support, and funding towards cures and better quality of life.

Or watch these videos to see what life with SMA type 1 is like for Max and us: